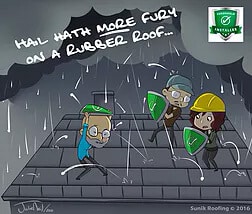 In the mid 1980’s Calgary’s population was around 750,000. There were only a handful of shingle suppliers. While Calgary was not a small town, it seemed that within the trades and suppliers, we all knew of each other, kind of a small town feel.

I first met Henry Kamphuis, inventor of the Euroshield Rubber Shingle, as a competitor. He was a partner in a small roofing company and we were up against them on many quotes. The next time I met Henry he was estimating hail claims for AK Contracting.

In those days Sunik was doing the bulk of AK’s roofing hail claims (1600 jobs in the 1991 hailstorm). It was around this time that I got to know Henry. Al would take us out for beers after work, and the occasional golf outing.

Henry is an amazing golfer by the way. AK had warned me that Henry was good enough to go professional.

Fast forward to 1999, I am at the Calgary Home and Garden show working at our Sunk booth. I had not seen Henry in a couple of years. It was good to see him. Henry is a big man around six foot five and is as passionate as a man can be. He has two speeds, fast and faster.

He literally grabbed me and dragged me down to his booth; I had no idea why he was so excited. He stood back watching my reaction as I approached his booth and saw the first ever Euroshield display. (They called the product G.E.M back then)

Henry had told me he invented this product. I had been in the roofing business since the early 70’s and had never seen anything like it! In my mind, his product was revolutionary, there was nothing like it on the market.

Henry said “What do you think?” I said “I think you are a Genius, this product has so much potential, and shingles made of recycled rubber!”

He invited me to the southeast Calgary plant for a tour. The 35,000 sq. ft. production area and 5 acres looked huge with only 5 machines in it. Henry showed us his custom made injection-molding machines and in the beginning it was a slow process, each tile took a long time to make.
There were a few bugs to work out as with any new product. Henry and his team worked with installers to find and make improvements to the Euroshield line. The Building is now full of machines and they also added computer controlled color additive insuring the product color is consistent.

Fast-forward again to almost 20 years to today. My initial thought that this is a revolutionary product in the roofing industry has come full circle.

Thousands of roofs in Alberta, not to mention Netherlands, Russia, the Caribbean, West Indies, St Martins Bahamas and Scotland are covered with rubber. Now that Euroshield has attained their USA approvals, it wont be long until the USA is covered in Alberta rubber also.

To Henry Kamphuis; We here at Sunik Roofing are proud of you and your game changing invention, a shingle that is advertised as hail proof! Atta boy Henry!