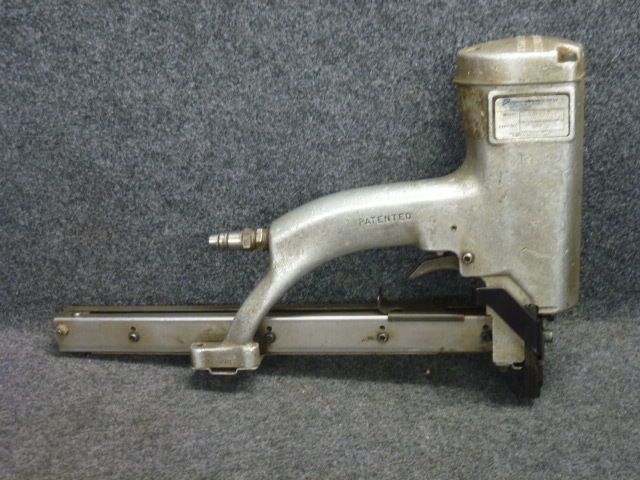 The Evolution of the Roofing Gun

I started roofing in in the spring of 1973 Near Friendswood Texas. The building boom was on and demand for trades was high. In those days, in Texas, the homebuilders’ supplied the product and​

The pay was not much, as this included full felt under-lay and to pack shingles from the curb to the rooftop. Shingles were twenty-seven to a bundle and three bundles to a square.

Roofing was painfully slow in those days, as the staple gun had not been introduced yet, and it takes a few years to learn to hand nail with any speed.

One of the first things I noticed was that all other trades such as framers trim carpenters and decking laborers all had pneumatic nailers. It felt like roofers were in the Stone Age.

By the fall of ‘73 my partner and I were starting to get the hang of hand nailing. We could do a house in 2 days.

This all changed in the fall of 1973. My partner and I were working in east Houston, for US homes. We were hand nailing our roof when a 2-man crew jumped on the house next door. They set up their compressor, hoses and had two staple guns.

My partner and I watched as these two roofers from Tennessee completed a 27 sq. roof in one day. I was impressed. My partner and I put down 16 squares between us and it took us 2 hours longer.

If we could learn to do a house a day we could make a good living instead of just barely making ends meet.  We checked with the homebuilder and yes, the staple gun was a go providing the staples had a one-inch crown.

I got in touch with Steve at Texas Staples. He got us set up wit an Emglo Twin Pump compressor with Dual tanks, hoses and 2 spot nailers. These nailers were previously used for building pallets. According to Steve there were not any staple guns made specifically for roofing.

The Spot nailer was prone to jamming. It had aluminum rails which wore out extremely fast. The nose plate and driver blade were just made of steel and needed to be replaced almost weekly and there was no place to install a shingle gauge. There was quite a learning curve and the house a day we were hoping to roof did not happen right away.

We did catch on to the tools and figured out how to make them work. After two years I was able to shingle 27 squares in 8 hours alone. Bundles had 27 shingles or 81 shingles per square.

The same product today has about 60 shingles per hundred sq. ft.

We had to have 2 guns per shingler, as one was always in the shop.

I started hiring and training and in just 1 more year, with a team of 5, we were able to install 90 squares or approximately 4 roofs a day.

It was not long before Steve started coming around with staple guns made with shingling in mind. He would give us the gun free to test it for his company. The first one I remember was Berry Fast. It had a carbon tipped nose and reinforced rails. It stood up much better than the spot nailer.

The next Staple gun to come our way was the Duo-Fast Model 1748 it came along around 1977 and was the best made roofing staplers on the market for years. It was heavy (about 9 lbs.) and stood up to the constant pounding only roofers could dish out.

Towards the end of the 1970’s the roofing staple gun started getting a bad reputation. There were to many blow offs. In my opinion it was not the staple guns that were failing but rather the way most roofers used their tools.

Most shinglers began developing a single bad habit. This bad habit was the result of turning the gun as you stapled across the shingle. The first staple would go in straight, as this is the natural position, but proceeding across the shingle the hand slightly turns and the staples start going in at the wrong angle. This alone compromised the staples holding ability.

By 1980 staple guns were banned in the Houston area. It was certainly hard to go back to hand nailing, and even more importantly less profitable. I was working just as hard as always but taking home much less pay.

It was the fall of 1982 when Steve (my favorite staple supplier) called me up and said get over here, he had something I had been dreaming about for 10 years! I shared a few dreams with Steve so I was not sure what he had for me.

When I got to Texas Staple, Steve took me to the back of the shop. On the counter was a box that said Bostich N-10 coil Naylor test model. Steve explained that there were only 50 of these test models available in the entire United States and Bostich wanted to test them in the field before they went into mass production.

I was as happy as a tornado in a trailer park! That was until Steve told me the price of the coil nails were $72.00 a box and would do 1 house. A 50lb box of hand nails was about $35.00 and would do close to 2 houses, so needless to say the nails cost 4 times more.

Still I was thankful to be off of the hand nails and beating my finger with a hammer till they bled. We were back to the tools, increased production and a big fat raise. I loved this new tool and roofed about 80 houses with it. This gun was heavy but fast. It hardly ever jammed and stood up to the constant abuse of being in contact with the abrasive surface of asphalt shingles.

MLXLS
​​After three month of testing this product I had to give it back. This meant back to hand nailing and more smashed fingers. It was a long year before the N-10 hit the market. And if you bet that I would be the first in line to purchase this amazing tool, you would have won that bet.

The nail gun also allowed installers to turn their hand as the nailer crossed the shingle with no problems.

Todays roofing nailers are light, fast and inexpensive. Bostich has made many changes over the years. Their latest is the RN-46, which weighs less than 6 lbs. and has carbide steel contact points.

This is the evolution of the roofing gun as I have experienced it. To Mr. Bostich…thank you for taking roofers out of the dark ages and providing a tool that makes it possible to make a good living.